Big Dog Motorcycles is an American motorcycle manufacturing company specializing in high-performance, on-road cruisers. Founded in 1994, the company has grown to become the largest production-custom motorcycle manufacturer in the world, delivering over 30,000 motorcycles across the globe. The company’s production grew from building a single motorcycle its first year to peaking at production rates and exceeding 25 motorcycles per day in 2007. The company began slowing production at the onslaught of the “Great Recession” in early 2008 and eventually halted production for three model years (2012-2014) as the US recovered from the aftermath of the worst economic downturn since The Great Depression. The K-9 chopper was one of the models which suffered a premature conclusion in 2009 as a direct result of these circumstances.

As far as making a statement is concerned, this custom Chopper takes some beating! Built by Big Dog Motorcycles to commemorate the conclusion of the K-9 Chopper line; this bike takes all of the elements that made the original model so successful and presents them in a unique package which visually celebrates them. While many custom motorcycles sacrifice substance in the interests of style, this motorcycle comprises the ultimate expression of one of the most substantial choppers ever built.

This 2009 motorcycle was imported to the UK in 2011 with only 500 miles on the clock and has since covered only 4000 additional miles. It boasts a unique paint Job, polished alloy wheels, fully polished 117ccm S+S motor with 6-speed transmission and 300mm back end. This all combines to render the K-9 as one of the best handling choppers available, and at nine feet long it not only looks fantastic, it actually performs beyond expectation.

All of the features listed above comprise a motorcycle that will turn heads wherever it is taken and is equally enjoyable at both full chat on the open road or at cruising speed, below are some of the reviews available in the public domain:

“What a great bike, well balanced, Fast fun a very ridable bike. Never have I ridden a more fun, comfortable chopper style bike. Plus it doesn’t hurt all the looks you get, it’s like riding in a parade where ever you go!”

“I have owned many bikes over the years, metrics, HD’s and one Victory. The BD K9 I purchased is nothing short of awesome. The most comfortable bike I have ever owned and handles very well even with a 300 tire and long forks. don’t think I will ever own anything else. I wish BD would make a full dresser. Thanks Big Dog MC’s.”

“This is my second K9, so I guess it stands to reason that I more than like this bike. The looks, handling and performace are great. Crusing at speeds of 70 and 75 are not a problem for this machine. Very stable and light. Corners and turns are very easy even with a passenger. 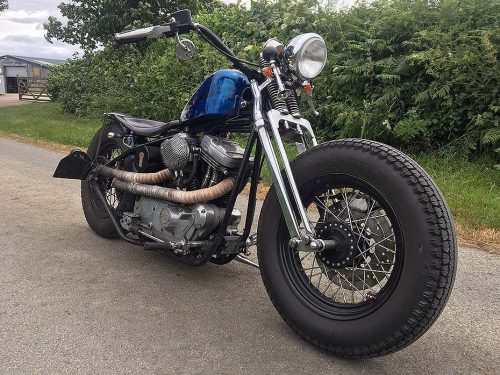